A forensic analysis of the markings and bloodstains found on the Shroud of Turin reveals a remarkable amount of detail about the brutal injuries sustained by the Man of the Shroud. These injuries are entirely consistent with the gospel accounts of the trial, torture and crucifixion of Jesus Christ. The Shroud therefore provides a visual record that corroborates those accounts but unlike the gospels which were written several years after the crucifixion, this record of events was created at the time that they occurred. This sacred cloth can be considered to be a Fifth Gospel which provides us with a powerful, visual account of the vicious brutality which Jesus Christ endured in the hours before his death on the cross.

Click on the links below for details of how the markings on the cloth tell the story of the Passion of Jesus Christ. 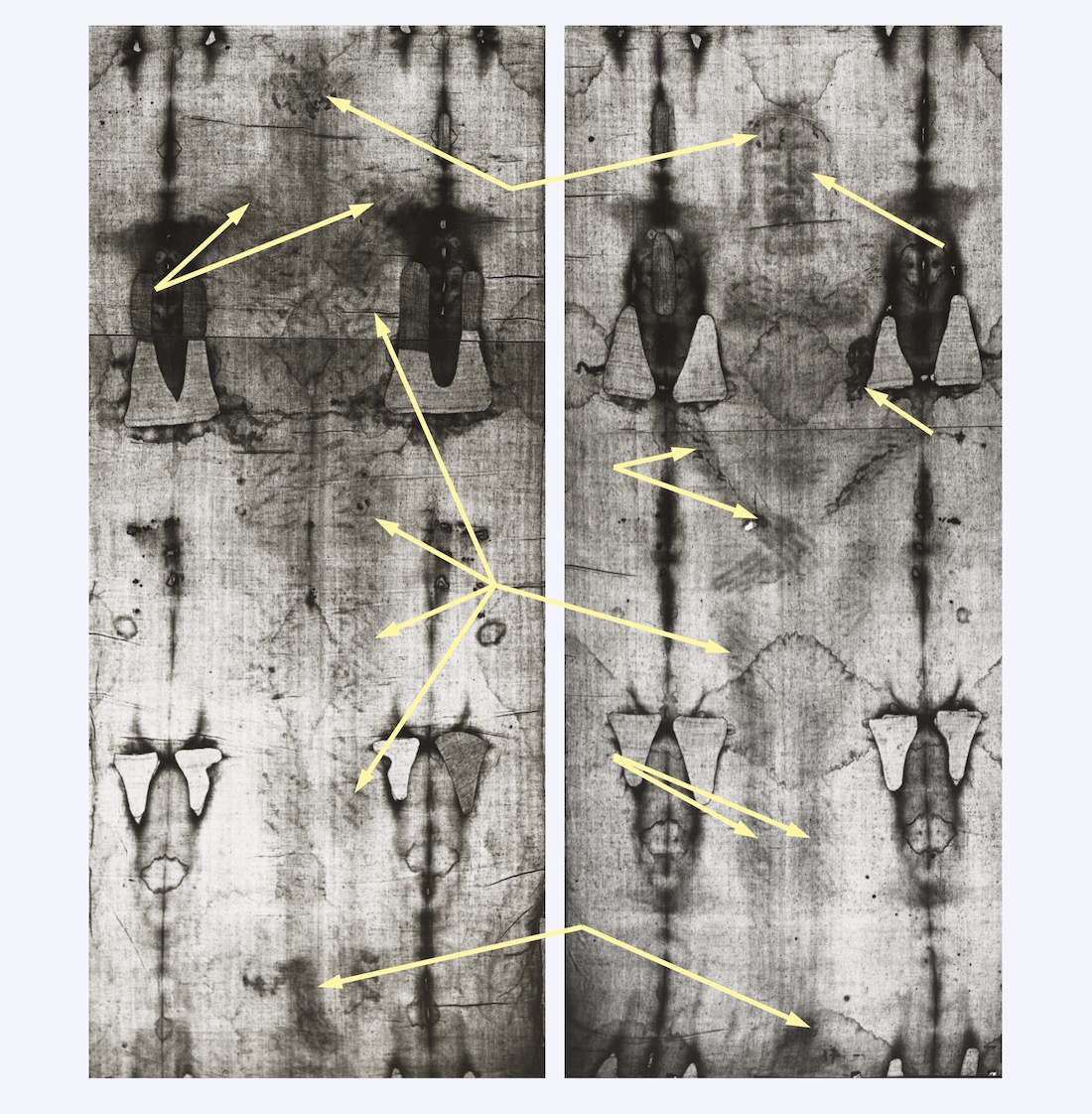 "And when he had thus spoken, one of the officers which stood by struck Jesus with the palm of his hand, saying, Answerest thou the high priest so?"

There is evidence of a swelling on the right cheek, just below the eye and indications of other blows to the face, to the nose and above the eyes.

"Then Pilate therefore took Jesus, and scourged him."

The back of the Man of the Shroud is covered with distinct marks from the shoulders down to the backs of the calves. There are a smaller number of similar wounds found on the front of the body. The shape of these markings is consistent with the wounds produced by a violent flogging with a Roman flagrum. There are at least 120 such markings over the body and their position indicates that the scourging was carried out by two men, one on each side of the body.

"And the soldiers platted a crown of thorns, and put it on his head, and they put on him a purple robe."

There are bloodstains all around the head showing that sharp objects, such as thorns, had pierced the scalp in several places. The position of these bloodstains suggests that the crown of thorns was not a circlet as often depicted, but a cap which circled the head and covered the crown. It seems quite likely that the Roman soldiers, who were intent on mocking Jesus as ‘King of the Jews’, would have loosely plaited a cap-shaped crown of thorns from a clump of thorny branches, rather than taking the trouble to replicate the traditional shape of a crown.

Traces of pollen from a species of thorny thistle called Gundelia Tournefortii have been found around in the head area of the Shroud. This finding provides further endorsement of the gospel accounts.

"Then delivered he him therefore unto them to be crucified. And they took Jesus, and led him away. And he bearing his cross went forth into a place called the place of a skull, which is called in the Hebrew Golgotha."

Although the scourge marks are quite clear and distinct, the marks around the shoulders and shoulder blades appear to be smudged. After examining the Shroud, forensic pathologist Robert Bucklin noted that these appeared to be abrasions of the skin surfaces. These abrasions were consistent with a heavy object, such as a beam, being carried on the shoulders and rubbing against the skin. We do not know whether the Man of the Shroud was forced to carry a full cross or just the cross beam.

"And he bearing his cross went forth into a place called the place of a skull, which is called in the Hebrew Golgotha: where they crucified him, and two other with him, on either side one, and Jesus in the midst."

There are bloodstains on the arms of the Man of the Shroud which emanate from nail-sized wounds in the wrist. The pattern of the blood flow from the wounds and down the arms conforms with the angle of outstretched arms in crucifixion. Although artists down the centuries have consistently depicted the nail wounds as being in the palms of the hands rather than the wrists, a French surgeon named Pierre Barbet has demonstrated that nails in this position would tear through the fingers under the weight of the body. He also suggested that a nail through the wrist would damage the median nerve, causing the thumb to retract. This explains why the thumbs cannot be seen on the Shroud.

"And he bearing his cross went forth into a place called the place of a skull, which is called in the Hebrew Golgotha: where they crucified him, and two other with him, on either side one, and Jesus in the midst."

There is a flow of blood from the heel area of the Man of the Shroud and a pool of blood around the ball of the foot. It is possible that two nails could have been used to hold the feet but a recent discovery of the skeleton of a crucifixion victim revealed that a nail had been driven through the area near the heel and ankle. This nail position would be capable of supporting the weight of a man and could have produced the blood stains seen around the foot area of the Shroud.

"The Jews therefore, because it was the preparation, that the bodies should not remain upon the cross on the sabbath day, (for that sabbath day was an high day,) besought Pilate that their legs might be broken, and that they might be taken away. Then came the soldiers, and brake the legs of the first, and of the other which was crucified with him. But when they came to Jesus, and saw that he was dead already, they brake not his legs."

Breaking the legs of a crucified person was a way to ensure that they died quickly. With legs broken, the victim cannot push themselves up to breathe, causing death by suffocation. The image of the Man of the Shroud shows that his legs were unbroken.

"But one of the soldiers with a spear pierced his side, and forthwith came there out blood and water."

There is a large wound on the right which appears to penetrate the body between the fifth and sixth ribs. The shape of this wound matches the leaf shaped blade of the Roman Lancea and the stains around the wound appear to be a mixture of blood and a clear, plasma-like fluid. Some physicians have suggested that the clear fluid would have emanated from the pericardium, which is membrane surrounding the heart which would have been pierced by the spear. Others believe it to be a plural effusion caused by trauma to the chest from the severe flogging. Both camps do however agree that it is entirely plausible that blood and water would have flowed from the spear wound.

Unless otherwise stated, all Shroud Photographs © Vernon Miller, 1978. No unauthorized reproduction of Material on other Websites is allowed without prior written permission from the shroudphotos.com copyright holder. Original photos are available for free at www.shroudphotos.com